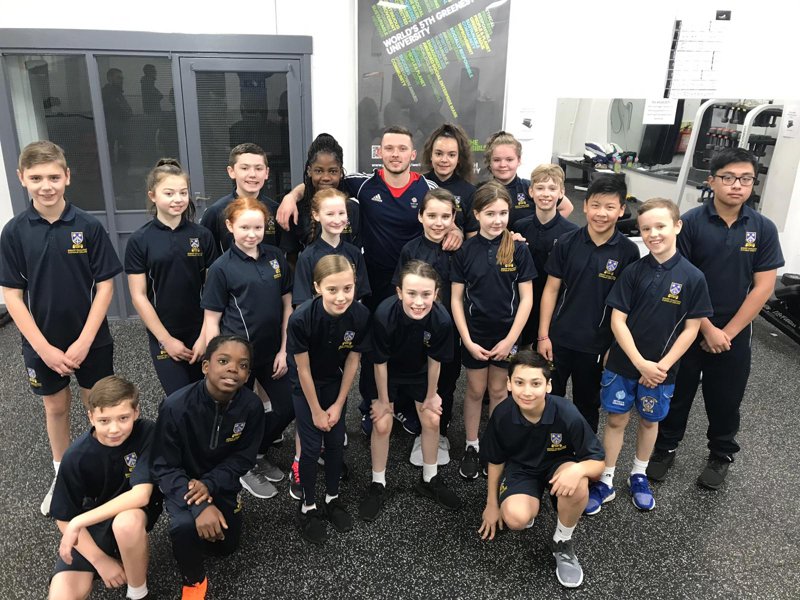 Commonwealth and European Gymnast Champion Inspiring the Next Generation

On Wednesday 6th of March former student and International Gymnast Dominick Cunningham opened the newly built Fitness Suite at Bishop Challoner Catholic College. The suite is named after him following all his international success in Gymnastics most notably as a European and Commonwealth Champion.

Dominick performed a fitness session in the suite with Year 7 students and performed his mandatory backflip. Dominick then spoke to all of Year 7 about his experiences as a world class gymnast and even got on the trampoline to showcase his amazing skills. The College’s artist in residence, Niamh Ryan, has painted a mural of Dominick which was also revealed today by Dominick and the Principal, Mr Kevin McEvoy and will be displayed to the public at the front of the College. As part of the College’s Health and Well-being focus for the year it has invested in the new Fitness Suite with LifeFitness completing the refurbishment for students, staff and the local community to utilise. The Fitness Suite is embedded as an integral part of the College’s PE curriculum during the school day. In the evening and weekends it is available to the public and staff for personal training sessions with PT Planet Fitness, a company also run by two former students, for individual and group fitness sessions.

In the build up to Tokyo 2020 and Birmingham 2022, both of which Dominick is targeting to compete in, the College is inspiring the next generation of athletes as well as developing the health and well-being of the College and local community.

Today was pretty cool! I opened up my old schools fitness suite called the Dominick Cunningham Fitness Suite! Then I did an assembly and showed them some cool tricks! #lightwork #school #fitness #suite #backflip #fun #inspiring pic.twitter.com/X1eEuvykt6

May Half Term Newsletters